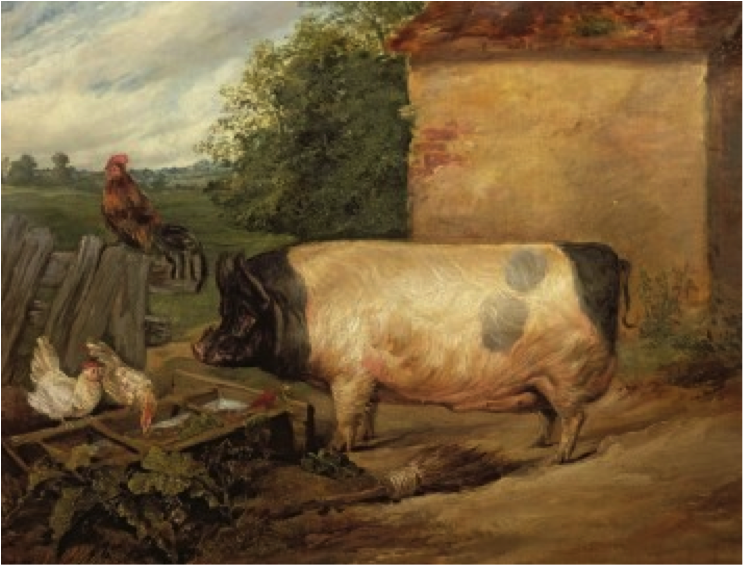 Our first pair of British Saddlebacks have arrived! They are cute as cute ten week old weaners from Clash Farm Saddlebacks. We hope they will grow into delicious baconers.

We came across the breed when we thought we would not be able to source our beloved OSBs (Oxford Sandy & Blacks) one year and thought they would make a good alternative. We’ve just finished rearing four OSBs from Thornielee Cottage and thought we’d give the Saddlebacks a try.

The British Saddleback has an interesting history and is the result of the combination of two similar breeds, the Essex and Wessex Saddleback.

Apparently, in the 1800s Lord Western, while travelling in Italy, saw some Neapolitan pigs and decided that they were just what he needed to improve his Essex pigs. He obtained a pair of Neapolitan boars and crossed them with his Essex sows. One of his tenants Fisher Hobbs of Boxted Lodge helped himself to the use the of the Neapolitan-Essex boars belonging to Lord Western and crossed them with his coarse Essex sows and in process of time established the ‘Improved’ Essex.

The Essex pig was mainly found in East Anglia. This pig had a black head and neck, as well as a clearly defined belt of white extending over the shoulders and continuing over the forelegs. The rest of the body was black with the exception of white feet and the tip of the tail.

The Wessex originated in the New Forest as a cross between two old English bacon pigs. By 1914 the breed was also found in the South and South West. It was black all over, apart from a continuous belt of white hair over the forelegs and shoulder.

The respective breed societies amalgamated in 1918 and the herd books followed suit in 1967 when the British Saddleback breed was established.

Today’s British Saddlebacks are hardy and noted for their mothering ability. The breed continues to be used to provide porkers and baconers. It is a popular pig for outdoor rearing and organic producers. The breed remains on the Rare Breed Society’s watchlist and we’re pleased to be contributing to its growing popularity by rearing them for the bacon and sausage to serve our B&B guests as part of a delicious Scottish breakfast.