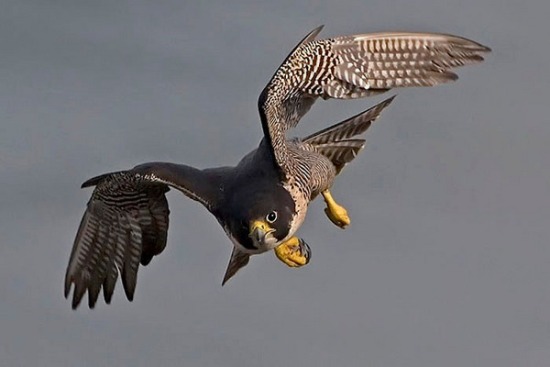 Last Saturday, whilst walking across our hilly paddock, I saw something I’d never seen before; a sand martin or swallow (there were both wheeling around against the blue sky, so I couldn’t be exactly sure which) was plucked out of the air by a large bird of prey. It was so fast and so sure in its attack that I was pretty stunned by what I’d witnessed. It took its prey to the ground and moments later flew off making a distinctive kee, kee, kee, kee sound. I wondered what this formidable hunter could have been.

Talking later to our friends (much more expert ornithologists than we are) they assured me that it could not have been a buzzard as they do not take their prey on the wing but I was sure it was too big to be a sparrow hawk. They laughed as I mimicked the cry of the bird but suggested I had seen a Peregrine Falcon.

Returning home, I looked up the Peregrine Falcon as I was aware we have highly protected nesting pairs at the nearby Falls of Clyde. Sure enough this was the bird I’d seen and the sound it made as it flew away was unmistakable.

The peregrine is a large and powerful falcon. It has long, broad, pointed wings and a relatively short tail. It is blue-grey above, with a blackish top of the head and an obvious black ‘moustache’ that contrasts with its white face. Its breast is finely spotted. It is swift and agile in flight, chasing prey. It is the world’s fastest animal, reaching speeds in excess of 200mph!

It was when I read that they feed on medium-sized birds, such as wading birds, pigeons and small ducks and will even attack a small mammal, that I began to wonder if the two guinea fowl that had disappeared earlier the same afternoon had been victims of the Peregrine Falcon.

I think I witnessed a spectacular but deadly visitor to The Lint Mill.