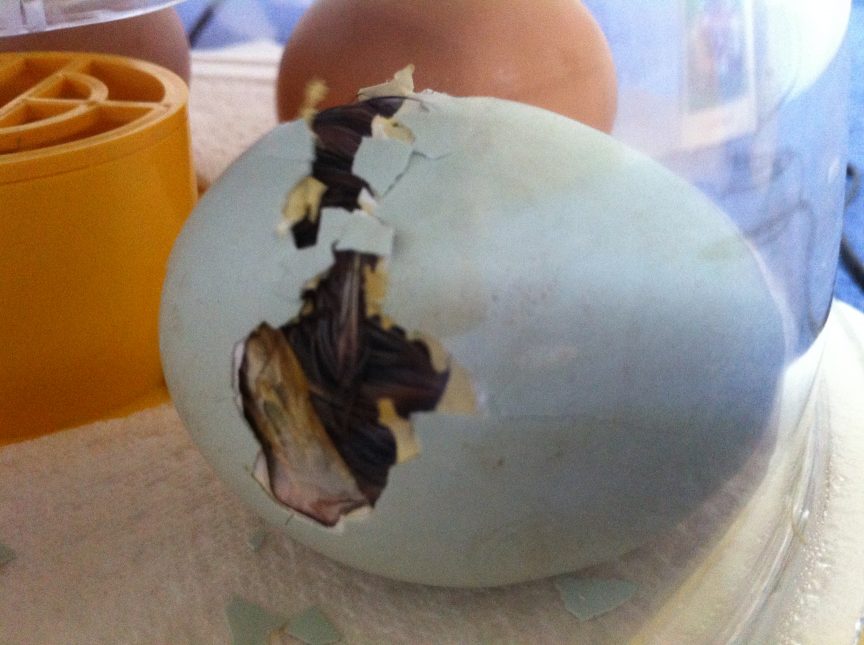 There can be few things as captivating as watching a chick hatch.  I’ve never witnessed this before and it was really quite astonishing.

My sister bought us an incubator for Christmas and for 21 days the eggs were kept at a constant 37.6 degrees centigrade.  Two days before any signs of hatching, tiny tweets could be heard from inside one of our Cream Legbar eggs.  Then the pecking started, (it’s called ‘pipping’) and the chick uses it’s egg tooth (not a real tooth but a small, sharp temporary structure on the top of their beaks) to cut through their shells from the inside.  First a small hole is made and as it continues to rub with the egg tooth the chick rotates its body, gradually cutting a circular ring around the middle of the shell as it turns.  When the cut is complete the chick pushes against the large end of the shell with its head and shoulders, and against the narrow end with its legs and feet, forcing the eggshell halves apart.  Several hours later, with enormous effort, a huge (relative to the size of the blue egg) damp feathered chick burst from it’s shell.

A few hours later, the little creature is dry, fluffy and ready to pose for any number of Easter cards!  We had a 50% hatch rate, which seemed ok for our first try.  Our second lot of chicks are due to hatch this weekend, so see our Facebook page for updates.