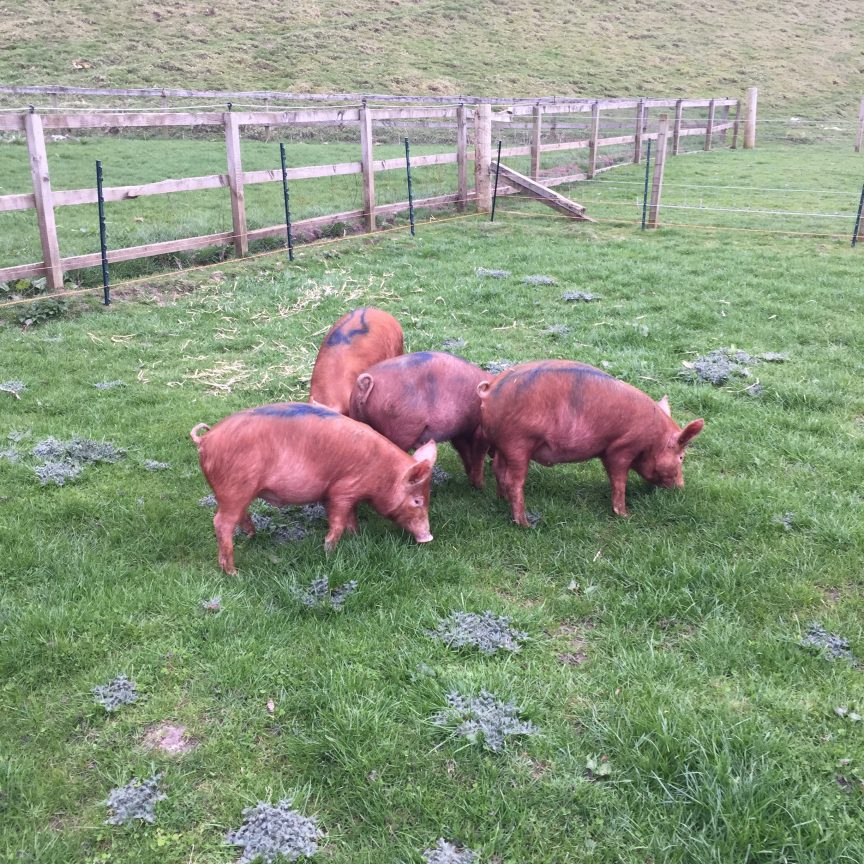 One Sunday morning in June 2009, Colin and I sat in the oriel window of our lovely apartment in Glasgow’s West End enjoying a leisurely breakfast and reading The Observer. There was an article that attracted Colin’s attention called “All the bacon sandwiches and none of the hard work”, which extolled the virtues of a new scheme dreamt up by multi-award winning Local Food Heroes Denise and Chris Walton of Peelham Farm. The scheme was called ‘Peelham-Own-A-Tamworth’ or POAT for short. It was the ultimate in field to fork experience. After acquiring one of the pigs as a 10-week old, owners would be invited down to the farm for three weekends over a year, when they could learn about how the pigs are farmed, help with the processing and take the finished produce home to fill the freezer and enjoy over the subsequent months.

Colin and I had long been enthusiastic foodies, always sourcing our meat carefully and buying as much organic produce as possible. This scheme took our desire to know the provenance of our meat one stage further. Colin was on the ‘phone on Monday morning and we became ‘RIC 001’ the first ever of Peelham’s ‘POATers’.

In August 2009 we made our first visit to Peelham Farm, a 680 acre organic, family-run farm located close to the Berwickshire Coast in the Scottish Borders with exquisite panoramic views of the Tweed Valley, Cheviot Hills, Lammermuirs and the North Sea. We met Denise, Chris and their business partner Amanda, were treated to a wonderful lunch using pork products from the farm, a tour of the pig breeding process (including the new butchery) and finally we chose our weaner. We were hooked! Denise and Chris’s passion for producing exceptional food and commitment to sustainable farming was infectious.

Here is Angus Walton with Colin, having caught the weaner and tagged it ‘RIC 001’. 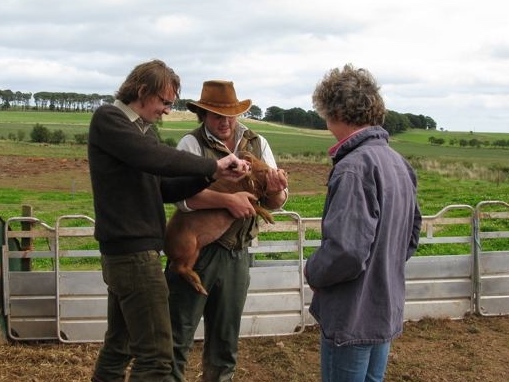 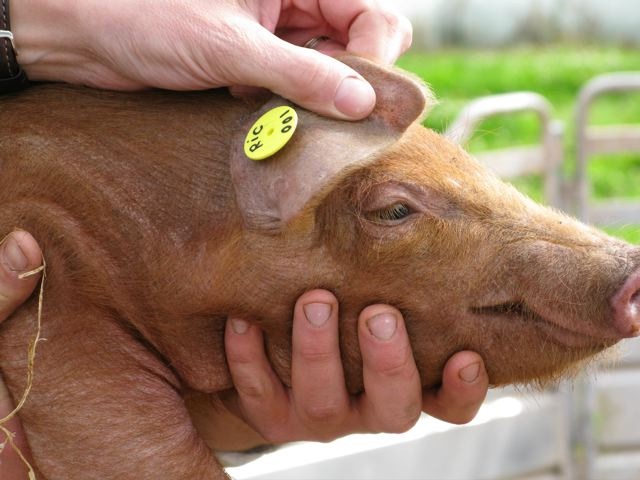 Meanwhile, as we ate lunch at Peelham Farm that day, little did we know quite how much our lives were going to change in the coming months. After fifteen very happy years in Glasgow’s West End we had just put in an offer on a 13 acre smallholding called The Lint Mill near Biggar and we were waiting to see if we were successful in buying our ‘dream home’.

Today,nearly eight years later we were back at Peelham Farm, this time to collect four 12 week old organic Tamworth x Red Duroc weaners to rear at The Lint Mill. They are not our first pigs. We have reared Oxford Sandy & Blacks and British Saddlebacks but we are now in conversion to organic status with the Soil Association and where better to source organic stock but the place where our enthusiasm was first stirred, at Peelham Farm.

We enjoyed catching up with Denise and having a great chat about pig rearing and organic farming with Angus, who is now a managing partner. It was lovely to meet Helen, Angus’s wife and hear all about how the farm is developing. Angus assures us that keeping the Tamworth crosses will be a different experience for us as he thinks they are the cleverest and quickest of porcines, being only a few genes removed from their wild-boar ancestors. Tamworths are hardy pigs that are able to stand extreme bouts of weather, they thrive in northerly settings where other breeds would struggle to cope with the climate. They’re renowned for the quality of their bacon and Angus believes that a well-tended, organic Tamworth is an excellent choice if you are rearing a pig for meat.

We love having pigs at The Lint Mill. They feel like the heart of the smallholding. And our B&B guests love eating our home reared bacon and sausage for breakfast! The small, special band of friends and neighbours who buy our pork know the difference between lovingly reared, organic animals and the intensively produced pork that is all too prevalent in our supermarkets, which pays scant regard to animal welfare, sustainability and taste.

Thank you Peelham for your passion and commitment. We will love our ginger pigs!