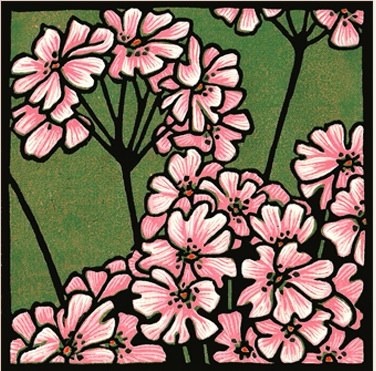 Jill Kerr, my best friend and artist has enjoyed her annual summer residency at The Lint Mill. She was fortunate to have some lovely June weather which made the surroundings especially relaxing. Jill said that the conservatory was a lovely, tranquil place to sit working quietly on her new designs, whilst taking time out to create a design for her local well dressing.*

Last weekend we spent time at Mellor Open Gardens, admiring some very creative planting (in what was my home village in Cheshire over twenty years ago) before driving north to Scotland. We brought several plants back for The Lint Mill cottage garden (although the lady whose garden they came from did tell me that many of them were originally from Culzean Castle in Ayrshire, so ironically they were making their way home to Scotland!).

Cottage gardens were somewhat of a theme for us while Jill was here. We spent time discussing the propagation of pelargoniums and other plant swopping schemes that would enable us to place a little of Summerfield here and a little of The Lint Mill at Summerfield over the coming months and years.

We also visited Whitmuir, The Organic Place where Jill bought us an Angelica plant for our kitchen garden. We had seen some mature Angelica plants in a garden in Mellor and they were spectacular specimens with huge flowers that will become beautiful seed heads later in the year, lending a sculptural interest to the garden.

Perhaps cottage gardens and sculptural planting will make their way into Jill’s new collection of linocuts? I will certainly keep an eye out for the quiet influence of her stay at The Lint Mill.

*Well Dressing is an ancient custom unique to the Peak District, in which the floral ‘dressing’ of the well is undertaken to bless the water supply. Some sources attribute this practice to the period of the Black Death in 1348-9, when probably a third of the population of England died of the disease, but some villages were untouched. The local people attributed this to their clean water supply and gave thanks by ‘dressing’ the village wells.