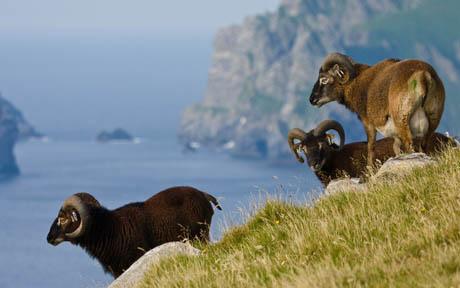 Following an advert on Accidental Smallholder Forum to re-home three young Soay ewes, we borrowed our friend’s sheep trailer and headed off to the Clyde Valley to collect the new additions to our flock.  We were attracted to the advert, as we have recently reduced our Shetland flock, we are very interested in rare breeds and could happily accommodate another few ‘girls’. Soay are unlike any other sheep, being the most primitive of all British breeds with very varied characteristics and a somewhat romantic history that (like Hebrideans and Shetlands) dates back to the Bronze Age.

So, here is a little of that history…

St. Kilda is a group of islands, which form the most westerly part of Scotland.  They are 41 miles from Benbecula in the Outer Hebrides (where I led drama workshops for teachers a few years ago!) and 110 miles from the Scottish mainland.  This archipelago consists of four small islands and some large rocky outcrops, which are all that remains of a long extinct volcano. The islands are remote and spectacular with the highest cliffs in Britain and are the home to large colonies of seabirds. There is evidence of human activity on all the islands Hirta, Dun, Soay and the most remote Boreray.

The island of Soay has been the home of the most primitive form of domestic sheep in the UK for thousands of years.  They remain a relic of early domestication due to the isolation and inaccessibility of the island. No-one knows how they arrived at the St. Kilda islands or when.

Owners say Soays are intelligent, nimble animals with excellent mothering habits, always with quirky behavioural traits and lots of fun to watch. They are excellent conservation grazers, being content in woodland and on hillsides. The coloured fleece (dark and blonde and usually self shedding) is sought after for many craft uses and their carcass produces lean meat of a delicious flavour fetching premium prices for the gourmet trade.

Unfortunately, last night the owners could only catch two of the three, so Poppy and Snowdrop have arrived at The Lint Mill, leaving Holly still to be caught.  The owners have taken down the fencing and live near woodland, so we hope that Holly doesn’t disappear into the woods becoming feral.  They have been pet sheep for two years, so we are hopeful Holly will come back, wanting to know where the rest of her little flock has gone.  We are waiting to hear and I’ll post a blog as soon as we have news.

They are lovely sheep and as Soay sheep are classified as “vulnerable” on the RBST survival watch list, we are really delighted to have them.